The doors on this have always rattled when they're closed and I couldn't figure out why everything looked okay, the doors on the white car close way nicer. Turns out under the plastic in the door strikers is supposed to be some other kind of bush and mine must have perished. Wish I'd bought new screws to go with them but too late now. 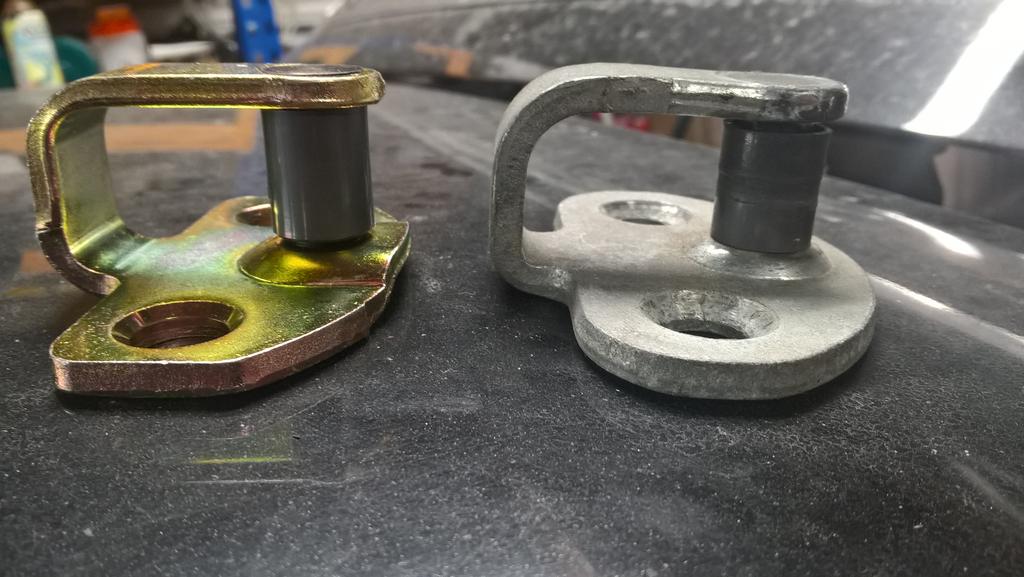 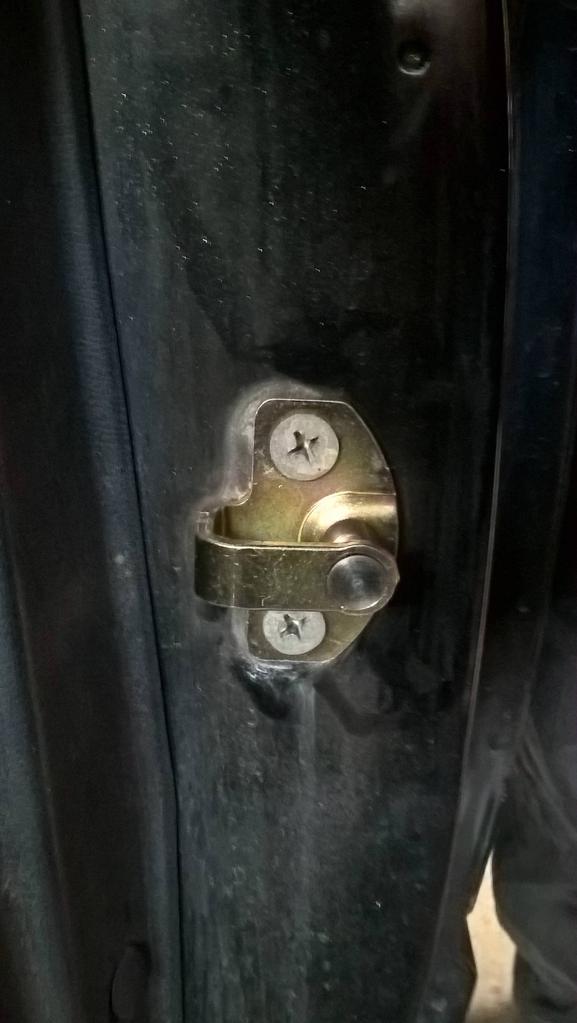 Was thinking of going proximity and push button starter on the 510 too but can't figure out how to make it look nice.
My orangatang 510 here.
Top

Finished fixing the front kit, for now at least. When I put the Fairlady Z bumper on the front I'll need to pull it off again and fix it properly, I used the holes that somebody had already drilled in it to put it together but half of them have pulled/broken through as they were too close to the edges.

Removed the mirror switches as I've sold them, I've been looking for a non electric mirror center console but they're really hard to find, there's one on Yahoo but it's brown.

Have fitted the hood prop rod finally too and the new drivers door striker.

Have been working on this thing a little bit here and there when I've got time.

3D printed some new door escutcheons, they aren't quite 100% right, will muck around with them on the weekend. 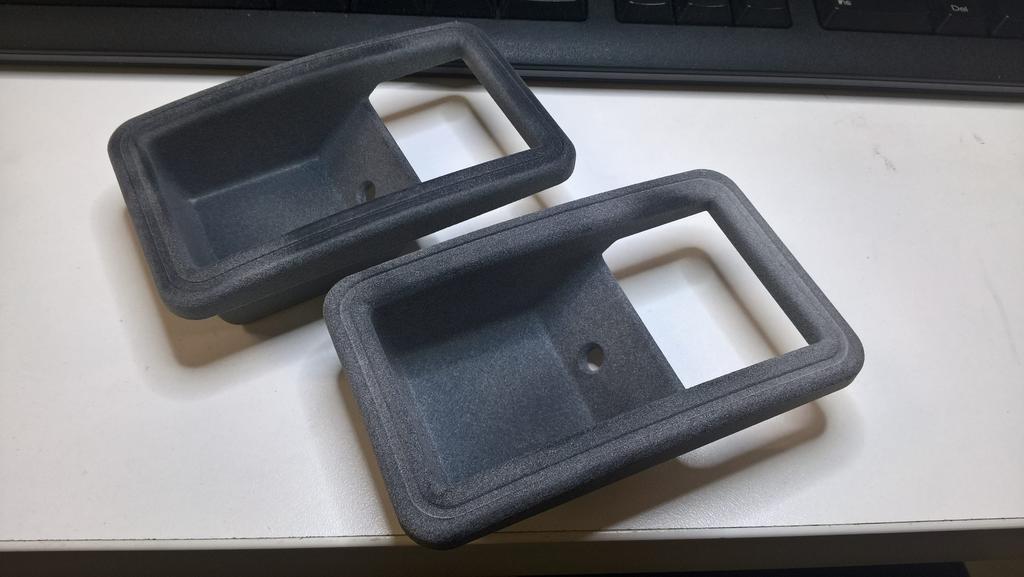 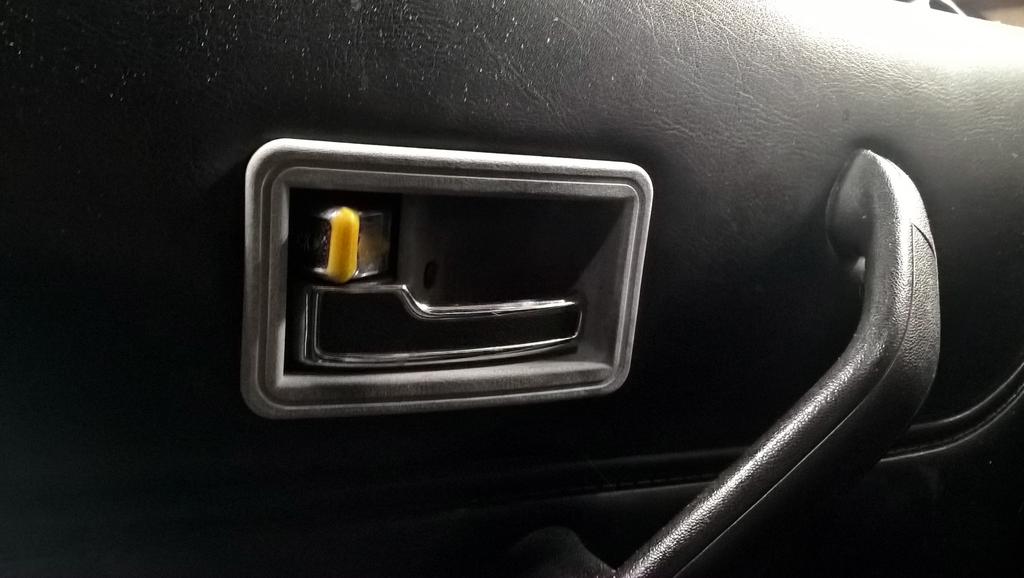 Bought a box of mirrors, going to get rid of the terrible ones that are on the car and fit a pair of OEM manual door mirrors. 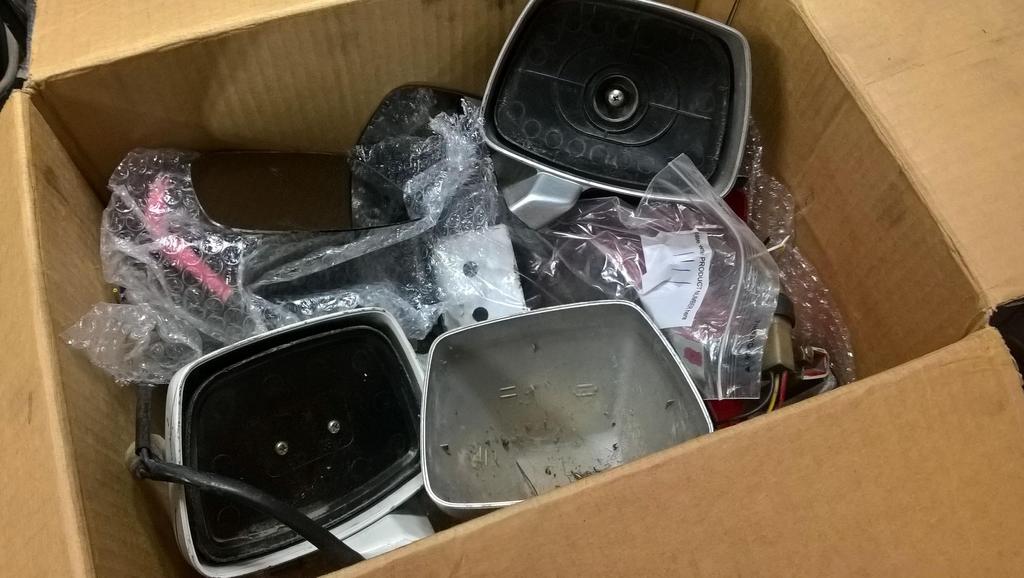 Also decided to make some ball joint adaptors like what I made for Asher's car so that I can go back to Z control arms instead of the R30 ones I'm running, will need to muck around with the radius rods as well, this is an R31 ball joint. 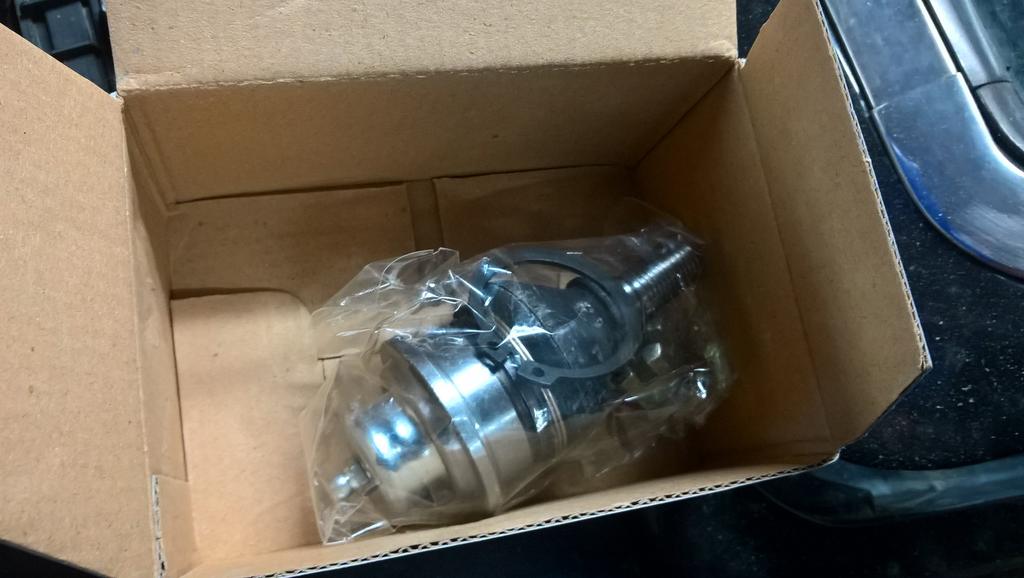 Decided to have a look at fitting the new door mirrors, it's been a long, long time since I've had the door cards off. The OEM door mirrors are a little bit weird, the right side one is fully plastic, the left hand side one has a metal base (cast zinc?). The bases for all the mirrors I've got are cracked so I'm going to draw up some new ones and 3D print them.

Quality install by whoever put the old ones on. 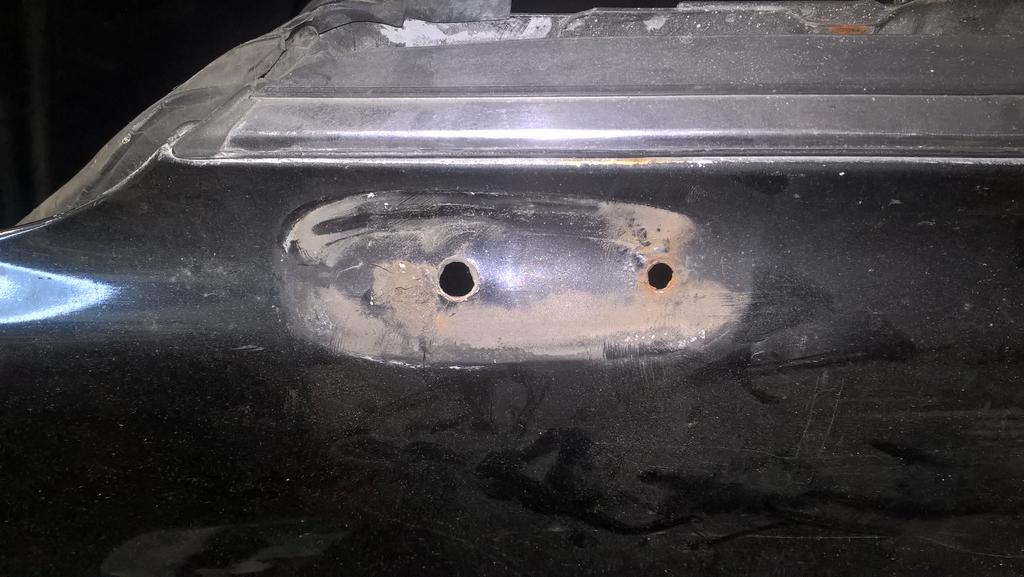 And this is what the new one will look like, kind of. 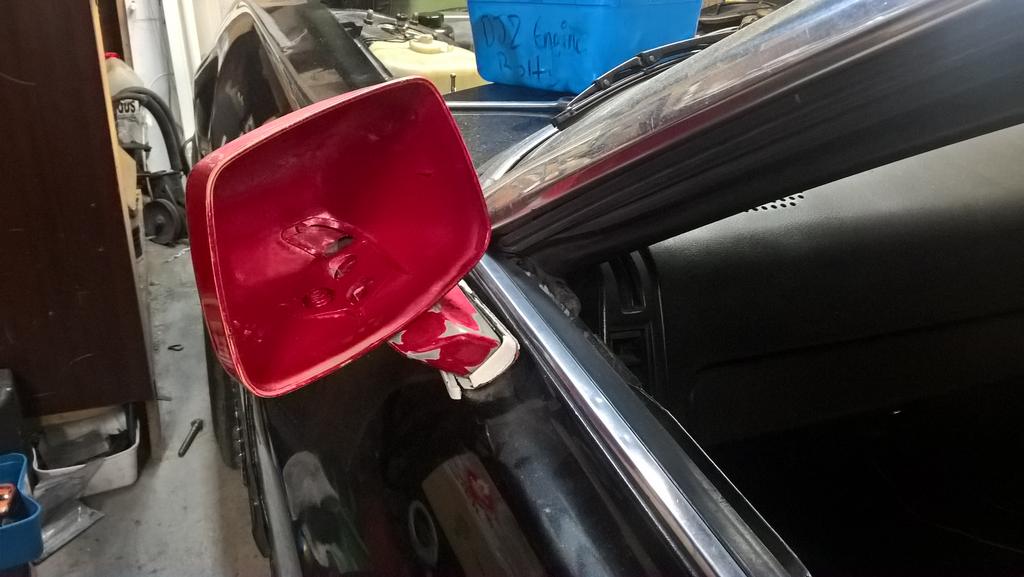 Got the left hand side mirror painted and installed, I'm just using the cracked base plate things that they came with until I can find the time to make the new ones. Since I'm using the holes that were already drilled in the door they're a bit further forward that factory, I'll see how they go, when I fix the rust and paint the car I'll move them to the factory spot.

Lubed up all the linkages and sliders in the door as well while I had the door card off. Also painted and installed the first escutcheon, they aren't quite right and sit against the handle but will do for now. 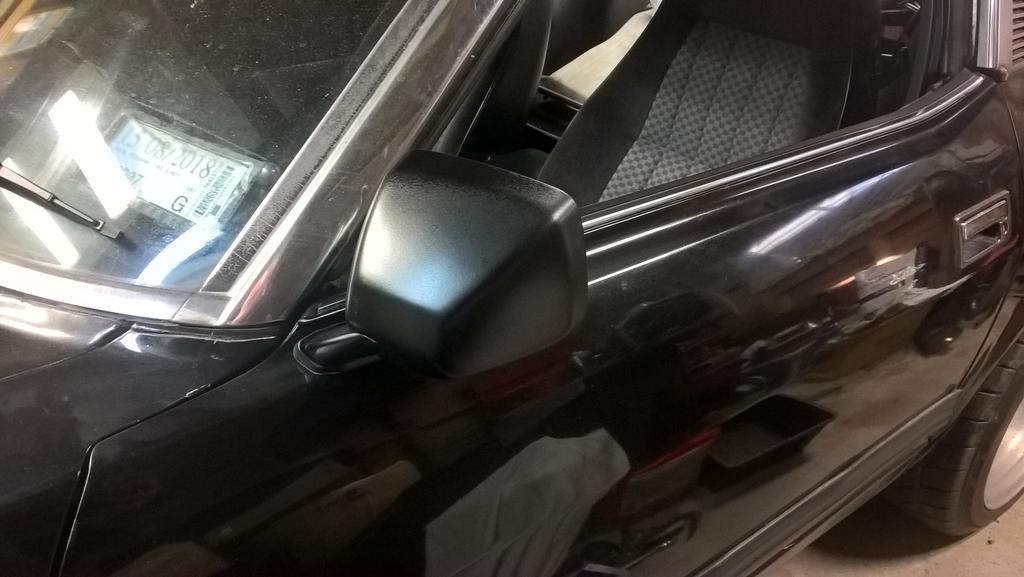 Pictureless update, this is booked in for a warrant with Damo on Wednesday so I thought I'd better put it back together.

Had to take the car out of the garage to get the drivers door card off, the hardest thing to do on this door was actually getting the replacement clips for the top door trim/wiper bit in, two of them were broken and were sitting in the bottom of the door, I've known something was up for a while as it's been quite loose.

Replaced one of the rubber mounts for the window track to try and get rid of a few rattles. Lubed up the whole mechanism too. Mounted the mirror and glued in the glass after I took it for a test drive.

I'm trying to fix all the little bits and pieces that have been ignored over the years, the boot hatch has rattled ever since I had to change it after the glass got smashed when my sub was stolen. I had to borrow the top stop pieces off the white car as this car hasn't had them for as long as I've had it. One thing lead to another and I ended up replacing the latch on the hatch, the other part of the latch, removing the rear number plate light assembly and lock, the trim on the boot hatch and also the battery (which is in the boot) to try and make it as good as I could. One of the rubber stoppers was missing so I robbed that off a spare hatch.

Big day for the Z today, went on the dyno at Specialised Auto Services for the NZ Datsun dyno day. I've been mucking around with a tune a bit over the last two weeks, got the timing map better after being told by the internet expects that my current my was "aids".

Was having trouble getting more boost into it, no matter what I did I couldn't get it to make more than about 17psi, then at work on Friday it was going well but started making a weird noise like it was leaking boost. Turned out the silicon directly off the turbo outlet had a big split in it. 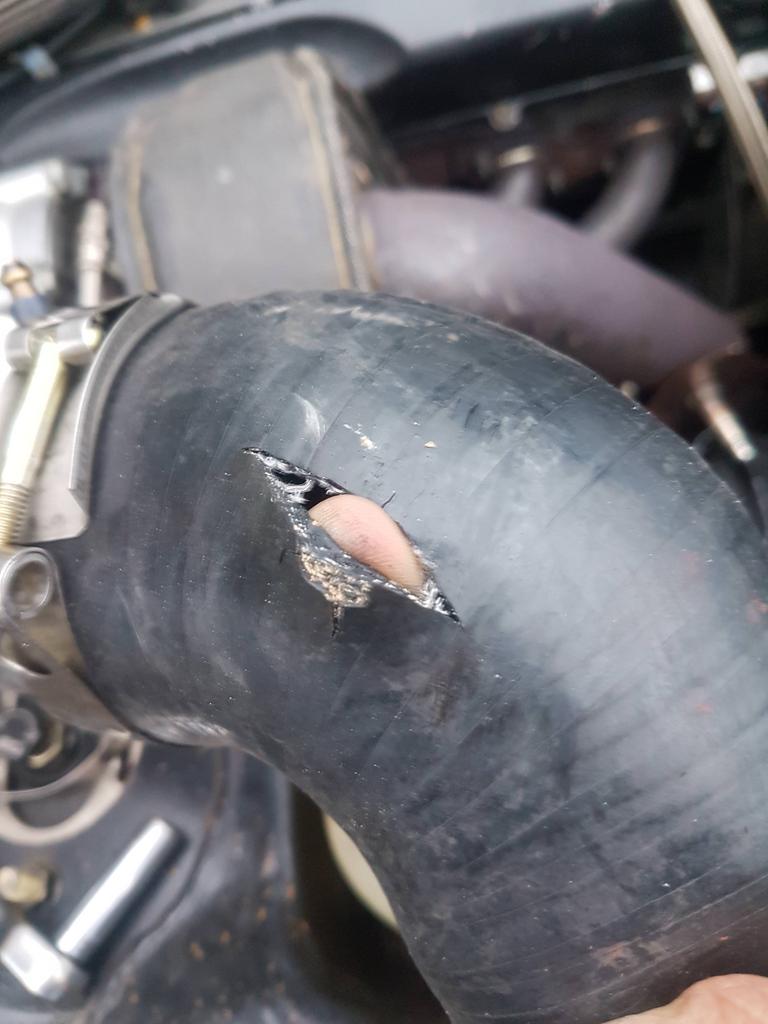 Luckily I spare a spare silicon the same but blue so I swapped it last night and tidied up the hosing for the boost solenoid. I fixed an oil leak from the oil inlet flange on the turbo as well. Didn't get a chance to really test it last night as it was raining a little bit and just kept spinning. 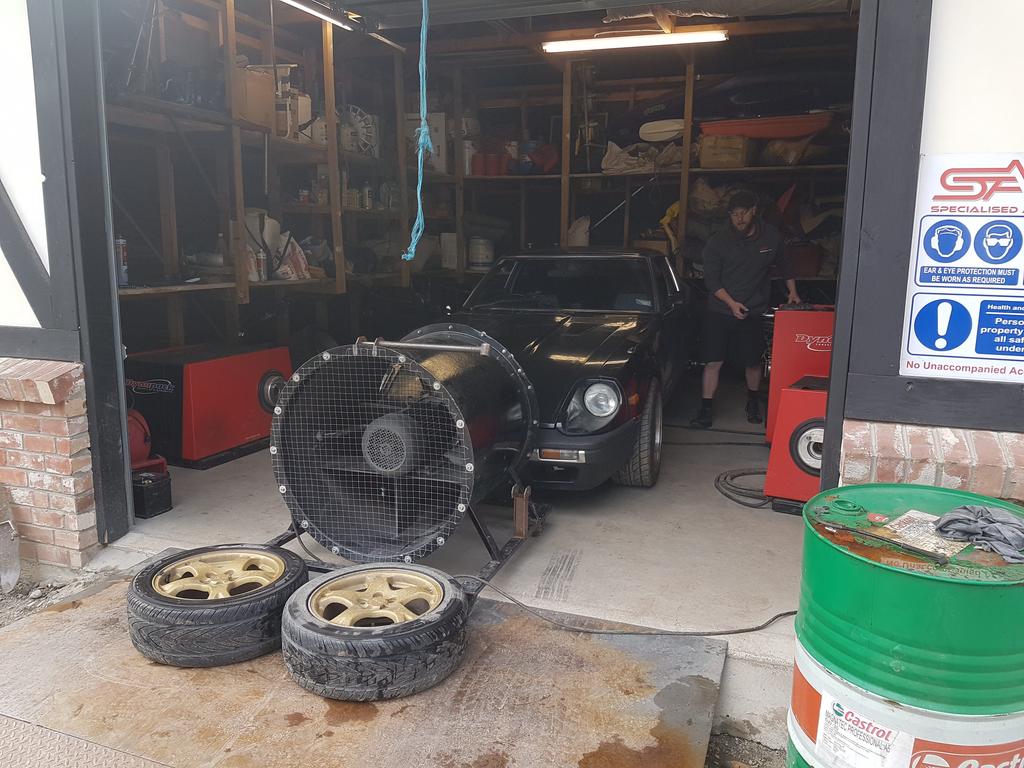 I asked the guys there if I could play with the boost a little bit while they were running it, it hit the map limit on the first run now that the leak was fixed, I wound it back a bit and they did a few more runs, took a little bit of timing out of it at the top and put some boost back in and ended up making 505rwhp on about 19psi. It still has more in it, the map sensor in the Link is only good for 21psi so I need to change that before doing much more, but it was still making power at 8000rpm.

Got some new mirror glass cut out by North Canterbury Glass, he gave me half a left over tube of the proper stuff for sticking them in so hopefully no more fall out.

Haven't done much else, drove it out to work for the track day and James helped me bleed the brakes which improved them but they aren't 100% where I want them.