Spent heaps of today sorting out the exhaust, I ran out of time to look at redoing some of it in stainless so will look at it next time. It took a lot longer than I thought it was going to but it's sorted for now.

Mounted the bonnet pins on both sides and with Zac and James' help we marked and drilled the bonnet for the clips. I don't have a way of holding them to the bonnet yet, but they work and they look pretty good. I think I'm going to have to add a stopper in the middle to stop it bouncing/moving.

So after all that I drove it an hour and a half home with James riding shotgun, it was a slightly dodgy drive with no boosted brakes and no power steering, it went pretty well apart from a new leak from the windscreen right on to the steering wheel and a few odd noises from the right rear which need a bit more investigation. Need to sort out a couple of bits and pieces then it'll be ready for a warrant.
Nissan 280ZX
Project thread
Other Nissan 280ZX
Project thread
Top

Ordered the bits to redo the power steering high pressure line, I got proper Speedflow stuff, was pretty spendy but probably about the same as getting a new rubber line crimped. Should be here tomorrow.

I've been trying to think of a good place to mount the air fuel ratio gauge and haven't really come up with anywhere decent. There is room if I move the radio over but I'd have to make a cup kind of arrangement to put it on an angle where I could actually see it, will think about it.
Nissan 280ZX
Project thread
Other Nissan 280ZX
Project thread
Top

Made the power steering line the other day, was a bit of a pain but I got there in the end. Accidentally left the power steering pump adjuster and belt at work so I haven't tested that it actually works, but I'll do that later on today.

Sorted out the brake booster hosing on the weekend, it's a bit ugly but it works, I'll tidy it up when I put the idle control on. Took it out for a test drive and to put some petrol on it, the power steering works well and the brakes work fine.

The only problem was that I lost one of the bonnet catches somewhere down Lineside Road, I bought two sets so I had spares. Decided to take it out to work yesterday and managed to lose two more catches on the way there, ended up having to bolt it down to get home. I'm pretty sure it was an installation error as I removed the stoppers to put the pins in, so there was nothing to stop the bonnet going down (the catches weren't attached to the bonnet yet). I didn't think they'd be able to pop off but turns out they can.

Tonight I removed one of the guard bolts and put the stoppers there, I've only got one latch at the moment but it seems to work heaps better. The bonnet seems to move around a lot which is a little strange. 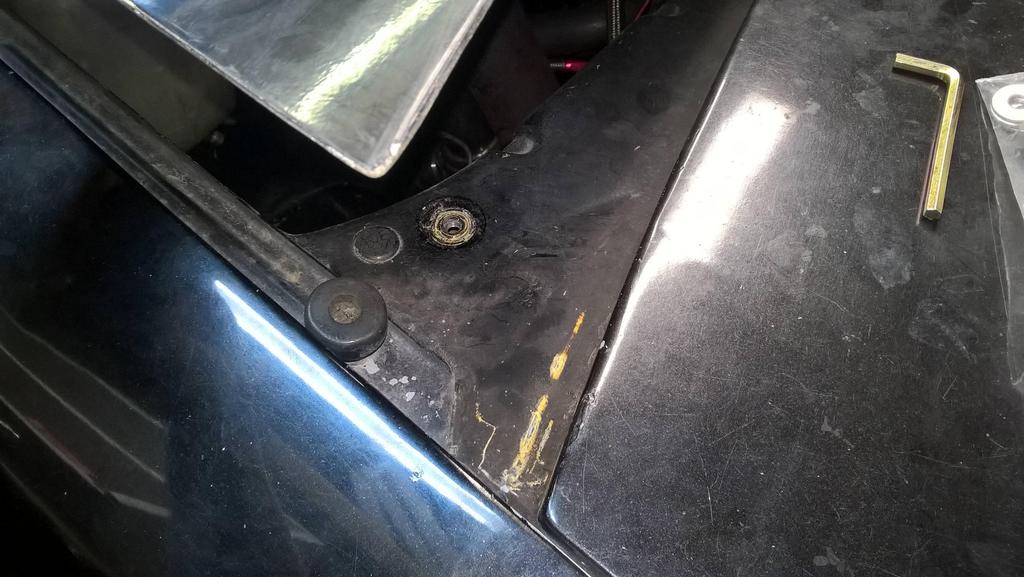 Took it for a couple more laps around what we call stages 2 and 3 at work, the shocks are a bit soft I think, will wind them up next time. It gets a little bit loose around some corners.

I definitely need to put some heat shielding on the bonnet, it's starting to change colour underneath right above the turbo. I'm thinking about some of the gold stuff but it might look a bit tacky.

One of the guys at work had a good idea about mounting my air fuel ratio gauge using one of the spare Vbox camera mounts, it's only temporary as I don't really want to mount it in there permanently. 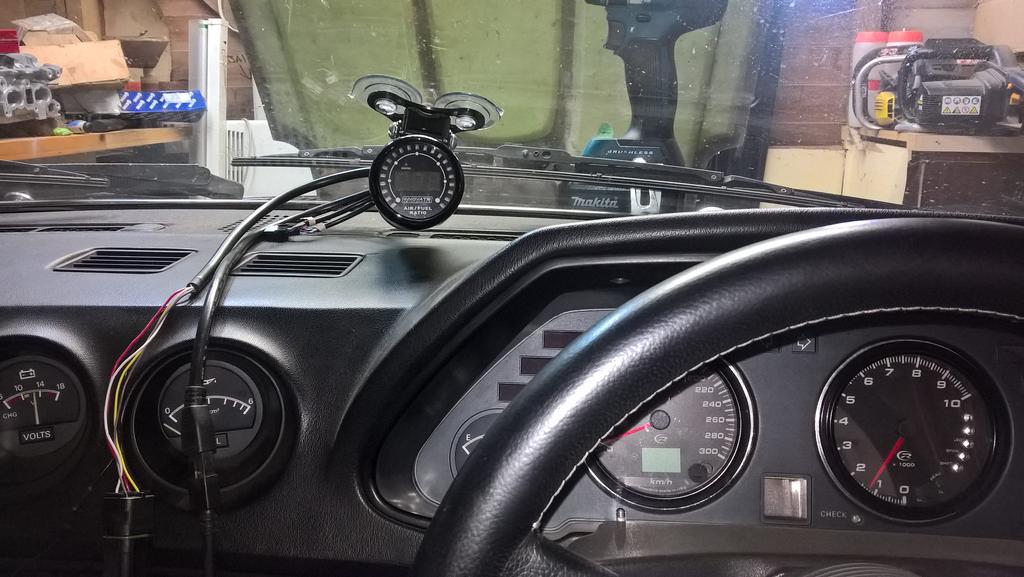 After driving this around a few times it seems to be making a bit of a noise from the right rear that stops when you apply the brakes even just a little, I was hoping it was going to be something easy to find but I jacked it up on Sunday and ran it with the wheels off the ground and no noise. The brake caliper was still moving a little bit like it was when I changed the stub axle, I had a feeling the rotor was warped when that happened so I took it off and took it to work and gave it a skim. Hopefully I didn't cock it up.

Other than that the car seems to be going okay, still a few little bits and pieces to tidy up. I want to take the windscreen trim off so I can have a look at the water leaks but I'm worried about breaking the clips as they aren't available new anymore from what I can see. I'm considering 3D printing some at work but I need one decent one to model off. 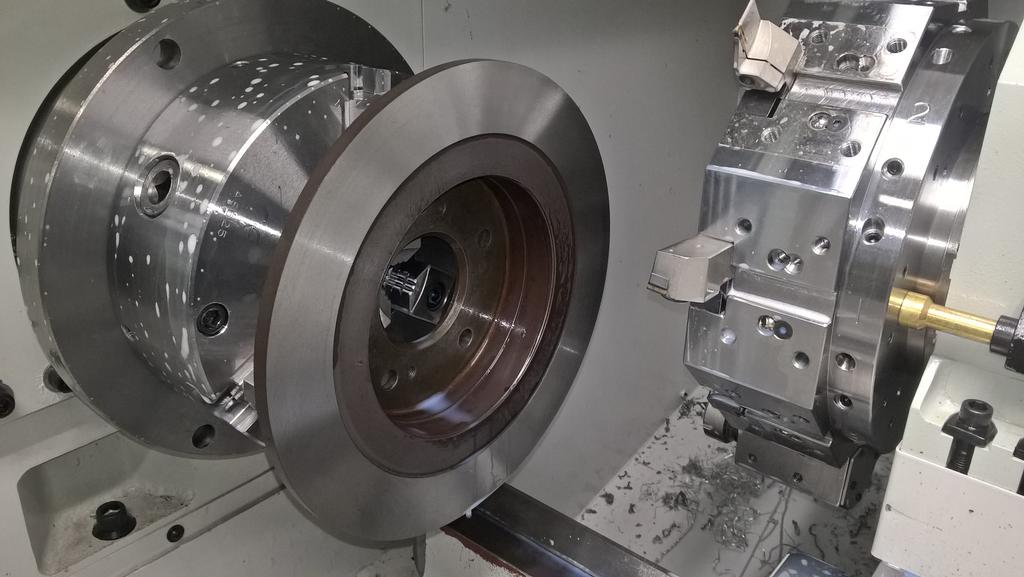 Got the new bonnet latches yesterday so I can properly sort that out now.

I was to replace the air inlet pipe to the turbo - I put a hole in it for the PCV system but now it needs to be on the other side, welding up the ali pipe is just going to be ugly so I've thought about either replacing it with another ali pipe or I see there are carbon ones for sale on Trademe now which look pretty cool. Would still have to bond on an AN fitting but I think that shouldn't be too hard. 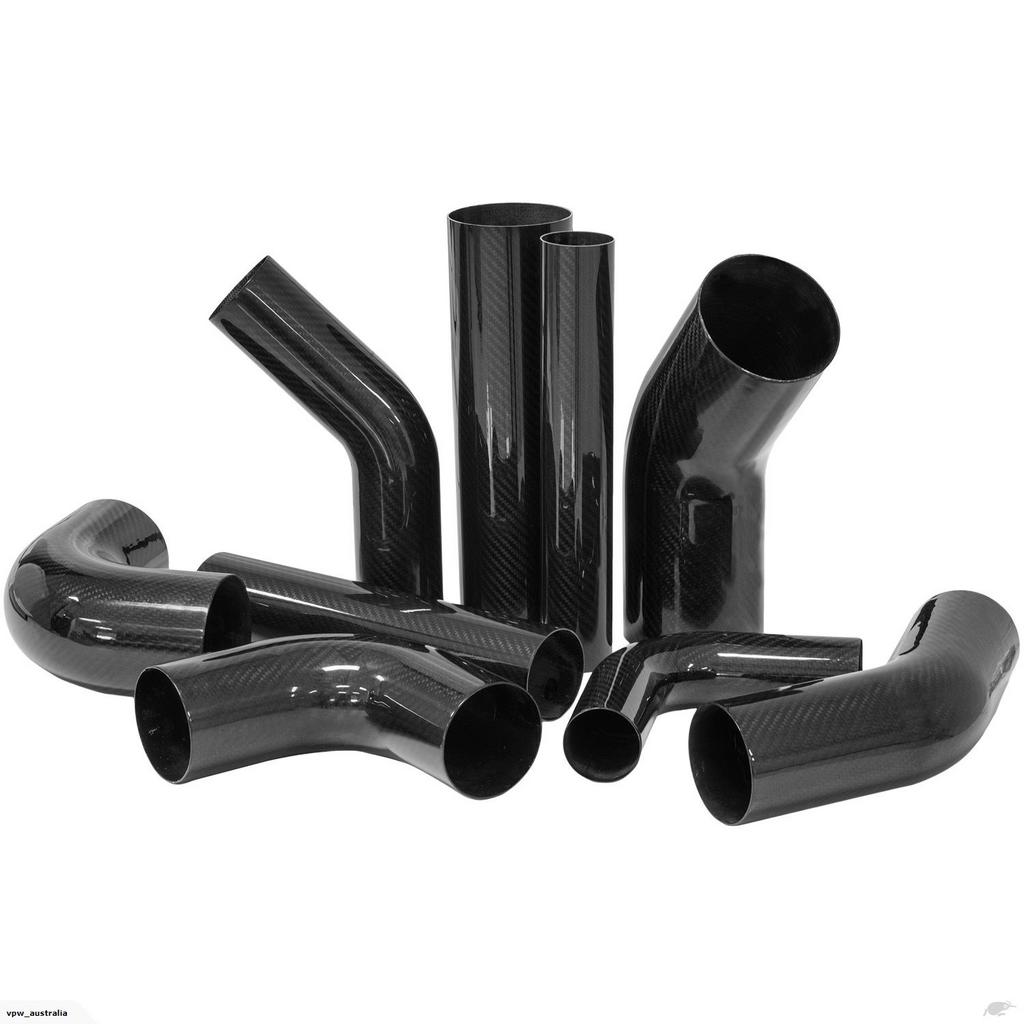 Haven't done too much on this over the last week or two, I bought a new windscreen washer pump from Aliexpress for the new tank once I actually get around to making it, might just warrant it with the old tank for now.

Also bought some DEI Reflectagold heat shielding for under the bonnet, I wasn't too set on the gold but then I thought it would actually match the wheels. Most of the other stuff was actually quite thick where this is really thin. Got a -4AN cap for the tee on the turbo oil pressure line as well so I can remove the pressure sensor but have the ability to put it back on easily if I need it.
Nissan 280ZX
Project thread
Other Nissan 280ZX
Project thread
Top

Took the bonnet back off today, ground around the hinges a bit more, it wasn't sitting flat on the left hand hinge, it seems a bit better now.

Borrowed a mouse sander thing from one of the guys at work and sanded down where I wanted to put the heat shielding, not really sure if it was necessary or not but I did it anyway. Seems to be a lot of holes (air bubbles?) under the top layer of fibreglass. I put a bit of paint on it too, only had a little bit left so just did under and around where the heat shielding went. It looks better than I thought it would, once the rest of the bonnet is painted it'll look better. 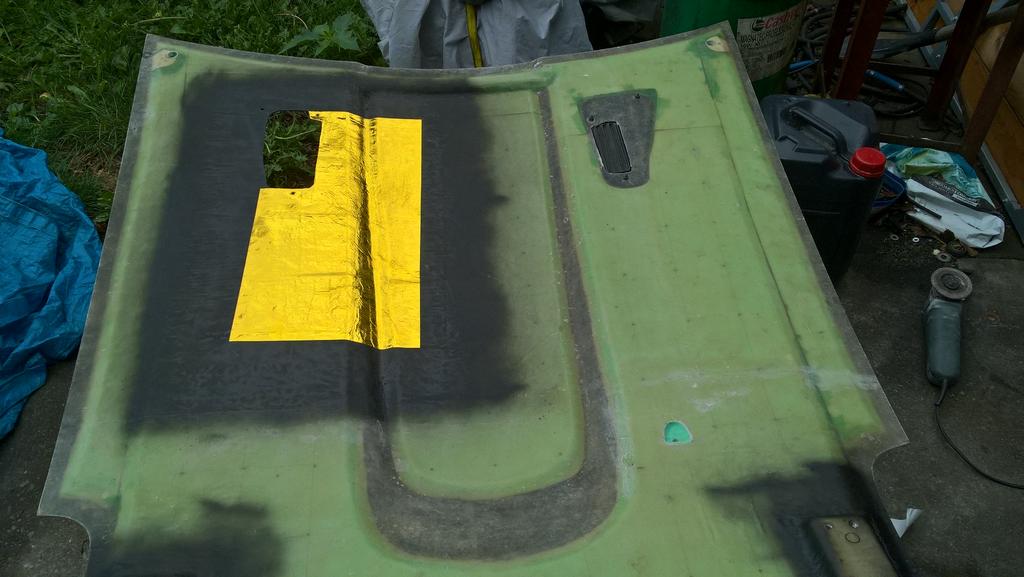 Also I don't think I posted up a picture of the bay once it was all back together. 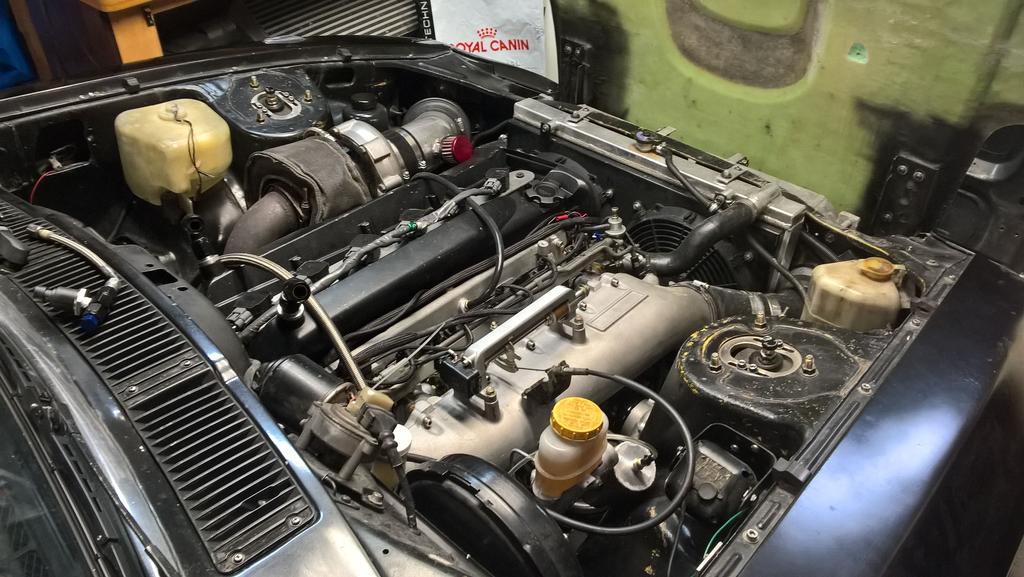 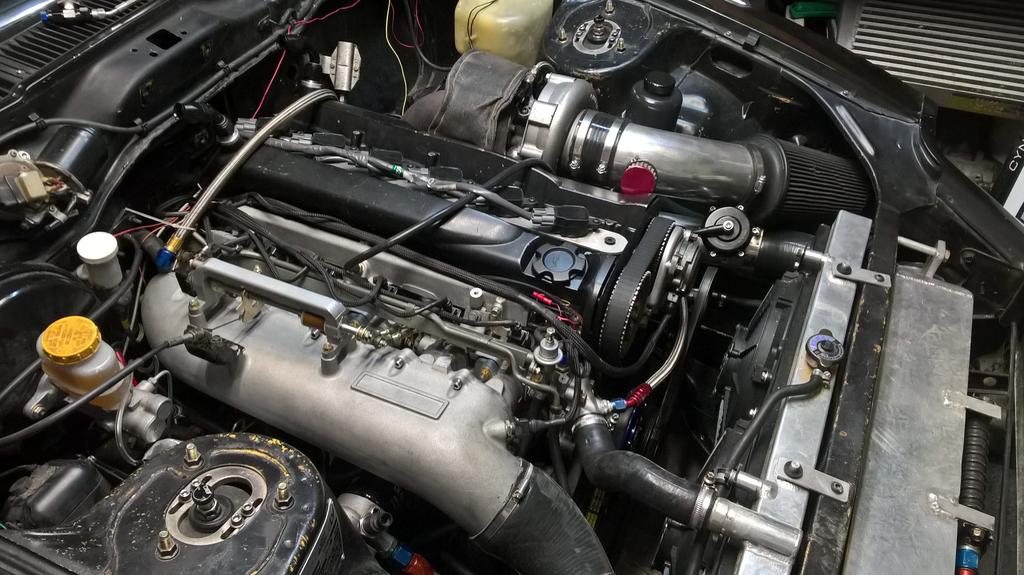 What gearbox are you running? Did you need to massage / cut trans tunnel at all?
Top
Post Reply
745 posts